Parents: David and Amy BRUCE, born Port Melbourne. Bruce enlisted with his father at 79 Alfred Street, embarked with the rank of Sergeant, later promoted to Lieutenant. Died from gunshot wounds to the back and both legs at the 11 Australian Field Ambulance. His mother was still in Alfred Street when the circular was returned in 1928. A Death Notice, Port Melbourne Standard, 25 May 1918 notes no less than seven sisters and four brothers.

A Bruce was listed on the Swimming Club Roll of Honour, 25 November 1916. 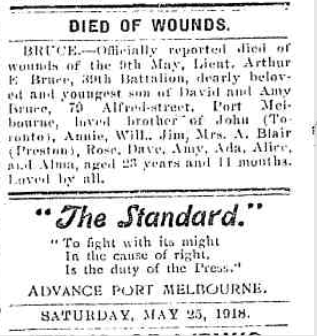