Mother: Mrs Sarah COLLIER, born Bendigo. He enlisted as a 21-year-old case maker with his mother at 188 Albert Street, Port Melbourne. Collier had previously served in the Royal Australian Naval Reserve (the image suggests the Royal Mail Ship Vernon). His mother was later in West Brunswick and then 160 Liardet Street, but apparently could not be traced at the time circulars were issued. He was shown in a New South Wales Casualty List, suggesting she was interstate at the time of her son’s demise.

Percy is listed among the Naval contribution to the Expeditionary Force that sailed for Rabaul in, what was then, German New Guinea, in September 1914. 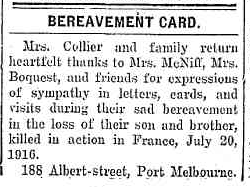