“The Prince and Mr Crockford”. “In front of the town hall on Friday morning of last week the Prince saw in one of the lapels of the coat of Mr E C Crockford (the town clerk) a badge of the Soldiers’ Fathers’ Association. ‘Your son, sir, is a soldier?’, said His Royal Highness. Mr Crockford mentioned in subsequent conversation that his son had been killed in action. ‘I am very sorry, sir,’ said the Prince with considerable feeling. It is these thoughtful asides and the many evidences of a kindly feeling that is increasing the popularity of the young Prince”. 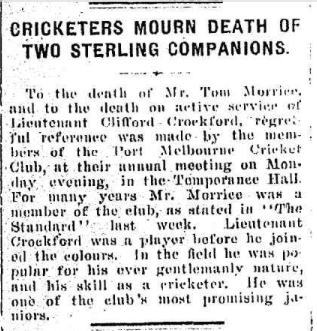