Aunt: Mrs Olive GARRAWAY (parents deceased), born Devonport, Tasmania, educated SS. Enlisted with aunt as next of kin, 169 Stokes Street. Brother, 6396, Horace Henry GOODSON was originally next of kin but enlisted at the same time and the pair embarked together with the 8 Infantry and with consecutive Regimental Numbers. Circular from Horace at Stokes Street.

H F (Frank) and H H C (Cecil) Goodson were orphans and although they both listed their aunt Olive Garraway’s address as their address when they enlisted, a newspaper report from April 1917 indicates they had been living with Mrs J Greig at 235 Princes Street. One for 12 years and the other for 10 years. 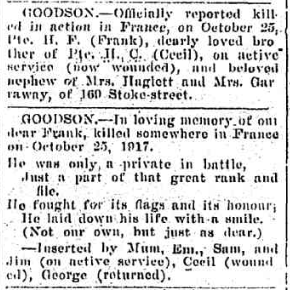