Parents: Hugh (late) and Rebecca LEWIS, brother, 1166, Percy William LEWIS killed in action 11 April, 1917. Born Northcote (circular, Attestation shows Port Melbourne), educated Nott Street SS. Enlisted as a 26-year-old packer showing mother as next of kin at 254 Bay Street. An In Memoriam notice in the Port Melbourne Standard 11 August, 1917, a year after his death was placed by the family of Alexander NUTTALL under the heading of LEWIS-WATT and suggested he was known as “Son”, common at the time when the father’s given name was carried down. 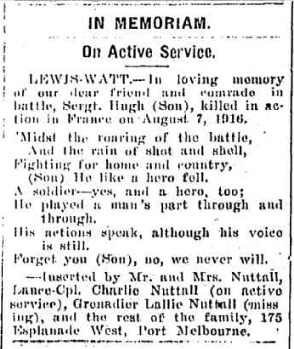