Parents: Charles Henry and Mrs Louisa MARTIN, born Melbourne. Martin enlisted in Ballarat as a 22 year-old builder with parents at 271 Graham Street. Originally Sergeant Major, 6th Infantry, later commissioned in Australian Flying Corps. Posted Missing on 17 February, 1918, confirmed killed in action in August after a report from German authorities revealed his remains had been found after he crashed behind enemy lines. No known grave. No circular returned.

The first intimation Charles’ father had that his son had been killed was a letter he received from a German officer returning his son’s belongings. Charles’ plane had crashed behind enemy lines and at the time the letter was sent, he was posted by the AIF as missing. 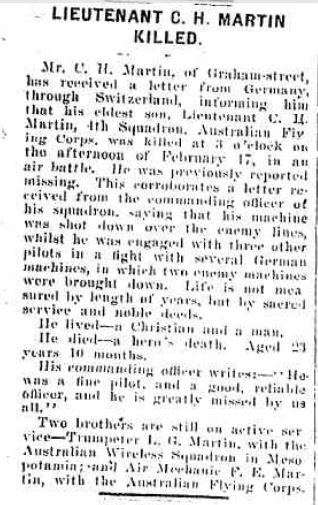