Parents: Myer (late) and Amelia “Millie” Jane NATHAN, born Port Melbourne. educated Melbourne University. He enlisted in Hobart as a 19 year-old student with his mother at 79 Evans Street, previously served with the Melbourne University Rifles. Only child and only one of the Jewish faith from Port Melbourne listed as a casualty, but his name appeared on the Port Melbourne Presbyterian Church (Bridge Street) honour roll (Standard, 22 December, 1917). No circular was returned. 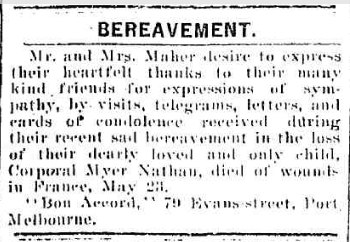