He attended the South Melbourne College and worked as a Master Coachbuilder in the family business of W & A Pentland Coachbuilders, Ingles St Port Melbourne.

He enlisted for World War 1 service on 27 April 1915, aged 36, and served in the 46th Battalion (Australian Imperial Force) with the Rank of Lieutenant.

He embarked on 14/3/1916 first to Egypt and then served in active service in France. He was involved in the First Battle of Bullecourt 11 April 1917 –

Bullecourt, a village in northern France, was one of several villages to be heavily fortified and incorporated into the defences of the Hindenburg Line in 1917.  In March 1917, the German army had withdrawn to the Hindenburg Line in order to shorten their front and thus make their positions easier to defend. This move was rapidly followed up by the British and empire forces, and they launched an offensive around Arras in early April 1917.  To assist the Arras operations, an attack was launched on Bullecourt on 11 April 1917 by the 4th Australian and 62nd British Divisions. The attack was hastily planned and mounted and resulted in disaster. Tanks which were supposed to support the attacking Australian infantry either broke down or were quickly destroyed. Nevertheless, the infantry managed to break into the German defences. Due to uncertainty as to how far they had advanced, supporting artillery fire was withheld, and eventually the Australians were hemmed in and forced to retreat. The two brigades of the 4th Division that carried out the attack, the 4th and 12th, suffered over 3,300 casualties; 1,170 Australians were taken prisoner – the largest number captured in a single engagement during the war. www.awm.gov.au/units/event_110.asp

During the action he was stranded on the wire with a gunshot wound and a fractured leg. He was admitted to a Red Cross hospital in Rouen France and then was repatriated to the Prince of Wales Hospital in London and later sent to Ireland for convalescence. His leg was amputated above the knee.

He was mentioned in despatches for conspicuous service.
discoveringanzacs.naa.gov.au/browse/records/409159/17

And his action is cited in Bean, C E W, Official History of Australia in the War 1914-1918.
Volume IV The Australian Imperial Force in France 1917 www.awm.gov.au/histories/first_world_war/AWMOHWW1/AIF/Vol4/

The photograph above was taken in 1919 with his parents William Christie senior and Euphemia Pentland, at their family home in Cheltenham.

He was fitted with an artificial leg and returned to work in the family coach and motor building firm specialising in sign writing on carriages and later on motor vehicles.

He married Edith Brown on 13 Sept 1919 and they had one daughter.

William is listed on the Presbyterian Church and Sandridge Marine Lodge Honour Boards. 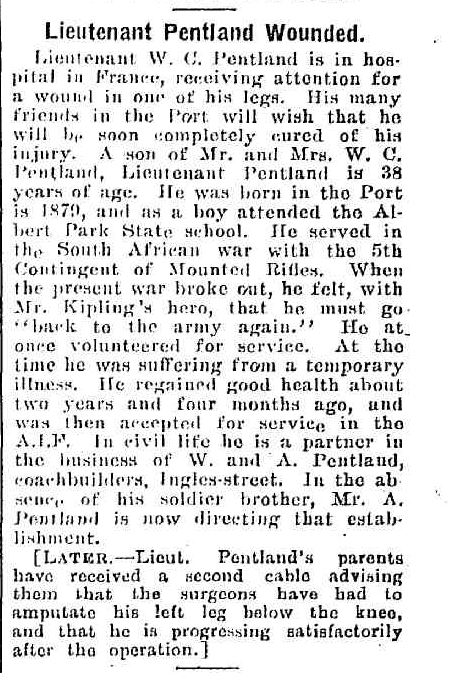