Henry and Elaine were married at Holy Trinity Church on 6 November 1915.

Parents: George and Mrs Maud M TAYLOR, wife: Mrs Elaine Elizabeth TAYLOR, born Port Melbourne, educated SS Port Melbourne. He enlisted as a 23-year-old porter with his wife at “King’s Lynn”, 137 Evans Street. No known grave; one eyewitness report suggested he was literally blown to pieces by a shell explosion and no trace of him could later be found. Circular returned by his widow from Coburg, father noted at 61 Ross Street. Death Notice, Port Melbourne Standard, 4 August, 1917 suggests there were no children from the marriage.

H Taylor was listed on the Swimming Club Roll of Honour, 25 November 1916. 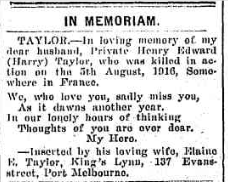