Parents: Stephen (late), Arthur THOMAS (step-father) and Mrs Ellen THOMAS (previously THOMPSON, born Port Melbourne, educated St Joseph’s RC, Port Melbourne. Thompson was a 26 year-old baker when he enlisted with his mother shown at 203 Albert Street. He spent just on five months in Camp at Flemington and Broadmeadows but for reasons unknown appears to have embarked with a number of other Victorian reinforcements from Adelaide. His mother returned the circular from Albert Street as Mrs Ellen THOMAS. Only son of Stephen and Ellen, one sister, Nellie.

J Thompson was listed on the Swimming Club Roll of Honour, 25 November 1916. 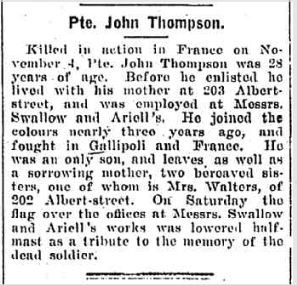 * Although this report lists that Private John Thompson was Killed in Action on 4 November 1917, his official service record lists his death on 4 October 1917.