When Great Britain declared war on Germany in 1914 Australia also found itself at war. No doubt many communities throughout the land began to make plans about how best they could support the war effort. For its part the Port Melbourne council quickly realised that the municipality, by virtue of its role as Melbourne’s port, was uniquely placed to play a special role in farewelling the troops on their journey into the unknown.

The council moved promptly to harness the abilities of local women by establishing a branch of the Red Cross Society under the leadership of the Mayoress. This committee was soon busy with the traditional Red Cross activities providing comforts for the serving men and women, while the council busied itself in arranging a gigantic send off for those local men who were soon to leave our shores. The emphasis was on the troops who were either already serving overseas or about to join them.

While this was underway a group of local women, many of them members of the Red Cross Committee, recognised that no regard was being paid to the plight of the sick and wounded men arriving at the piers. They decided to form themselves into what became known as the Women’s Welcoming Committee. The first thing they had to do was to overcome political resistance from some councillors who saw the women as undercutting the role of the council sponsored Red Cross Committee. Secondly, they needed to obtain the approval of the Defence authorities to go on to the piers when a hospital ship was in port.

Having achieved both those objectives the way was clear for them to undertake their commitment to greet every troopship arriving at the Port Melbourne piers for the duration of the war. No-one could know then how long that would be but it can be said that they achieved their goal and were still greeting ships in 1920. Raising money was crucial to their work, which entailed handing out baskets of cakes, pastries, sweets, fruit and cigarettes as well as flowers, sprigs of wattle and gum leaves to the hundreds of troops who arrived on each ship. Their appeals for assistance in the major newspapers (free of charge) drew a warm response from all parts of the State. They also rattled tins at the two main Melbourne railway stations. In addition they organised two major carnivals at the Port Melbourne Cricket Ground while simultaneously raising funds through fetes, picture nights, card nights etc. Finally they also organised several concerts and fancy dress events in the local town hall.

The dedication of the women, carried out in all sorts of weather, was soon recognised by the military authorities. When arrangements were being made after the armistice for a massive welcome to the first batch of returning Anzacs the women of the Welcoming Committee were given pride of place at the head of the pier to meet the procession as it began to wind its way through Port and South Melbourne to the City. They continued to enjoy this privilege for the various welcomes that followed.

As the war neared its end the women decided that they would leave behind a permanent legacy of their work as a gift to the people of Port Melbourne. This took the form of the band rotunda that stands on the foreshore at the foot of Stokes Street. It was erected at their own personal cost. The tablet set into the base of the rotunda is the only tangible reminder of the work of this remarkable band of women. 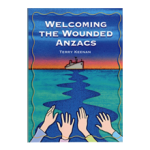