In July 1916, the Mayor, Cr Albert Tucker, instituted a French Button Day to be held on Friday, July 14 (Bastille Day). He called upon the ladies who had sold buttons on previous occasions and other ladies who would like to assist to sell buttons in Port on the day to support the French.

Buttons could be collected for sale from 2pm on Wednesday 12 July from the Librarian, Mr J Turner. 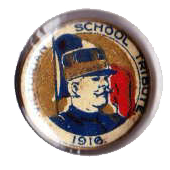 This button depicting the French General Joffre is probably not from Cr Tucker’s initiative but a wider Victorian Schools fundraising effort also in held in 1916 but does reflect the wider interest in patriotic fundraising in general and for the French in particular.