Among the papers found with the Honour Roll in the recess in the Nott Street School “Old Boys” Memorial were a few copies of a letter distributed by Mr A Richards (Head Teacher) and Cr J P Crichton (Chairman of the School Committee).

The letter calling for gifts to be sold to raise funds for “a fitting memorial to the large number – over 200 – of old Nott Street boys who have enlisted.” Interestingly the original typed version of the letter read “nearly 200” but this has been corrected by hand to read “over 200” reflecting just how many locals had signed up.

The bazaar was held at the school on 9 June 1917 and was a great success. 1 The walls of the room were decorated with sketches executed on blackboards by Miss Griggs and a soon as the Mayor, Cr William Howe, declared the sale open, the boys manning each stall began calling out, proclaiming the quality of their wares. While this proved a successful tactic, the centre of attention was a stall manned by two returned soldiers.

Privates Wilfred Martin and Henry Prest had a booth that was “centre of a crowd of interested people – ladies mostly – all the afternoon, who came to admire the two Anzacs’ good looks, and buy something as a souvenir off their bench. Some of the articles cost a lot of money.” 2

The ‘Queen Gypsy’ was another attraction of the afternoon. Surrounded by mysterious tokens, she told remarkable things about people who ‘crossed her hand with silver’. The Standard reveals this was Miss Bennett, one of the teachers.3

The girls from the domestic school at Montague sold jams and preserves they had made which also proved very popular.

The profit from the day was just over £60.

As you can see from the image above, the copies of the letter, along with many of the other papers found in the “Old Boys” memorial were quite fragile so the Port Melbourne Historical and Preservation Society through a Cultural Development grant from the City of Port Phillip undertook a project to clean, conserve and protect the papers in cardboard and Mylar sleeves (see below). 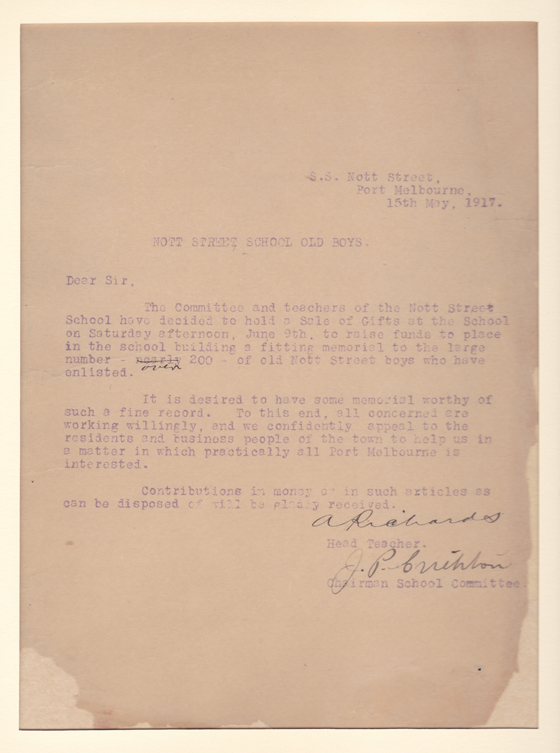