Today the Andrews government announced the appointment of a Fishermans Bend Development Board to guide the implementation of the Fishermans Bend Framework. The Board will work closely with the Port Phillip Council and surrounding communities.

The Fishermans Bend Review Panel ended its marathon hearings on Amendment GC81 on 22nd June – the longest running hearing in the history of Planning Panels in Victoria.

Amendment GC81 is the planning amendment and suite of planning controls that seek to give effect to the Vision for Fishermans Bend adopted in September 2016. The amendment applies to the precincts of Montague, Lorimer, Wirraway, Sandridge (not the Employment Precinct).

As soon as practicable but within 40 days, the Panel will produce a report for the Minister for Planning’s consideration.

Over the course of the hearings 376 documents were tabled.

The implications of the amendment for every potential development site were critiqued, explored and minutely analysed. Through the process the planning controls were put to the test and refined.

Heights, setbacks and densities were the main issues in contention. Landowners argued that the 80,000 population target in the Vision was too low – a point that was rebutted by the Minister in his closing submission to the Panel. 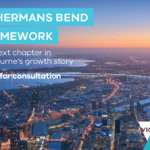 The draft Fishermans Bend Framework Plan was released in October 2017.

Approval of those applications would have pre-empted and undermined the intent of the Framework plan and its associated planning controls GC81 which were about to be reviewed by a Planning Panel.

The hearings started on 1st March and the Panel will sit for a marathon 56 days to hear all submissions. The Panel will deliberate on the submissions and prepare a report to the Minister within 40 days of the last sitting day. The Minister for Planning, Richard Wynne, will then respond to the Panel report.

Local member Martin Foley, at a community meeting held at the Golden Fleece in Montague on 20 March, committed to following the recommendations and outcomes of the ‘rigorous’ planning panel process. Shadow Minister for Planning, David Davis, declined to so commit.

A Fresh Look at Fishermans Bend