Change in the electorate

In spite of the Society’s protests, the federal electorate of Melbourne Ports has been changed by the Australian Electoral Commission to Macnamara. The names will apply from 13 July.

The Society argued that since Melbourne Ports was a Federation seat, the name should be respected as part of Australia’s heritage. In addition, Melbourne Ports has ongoing relevance in the life of the electorate.

The seat will now honour Dame Annie Jean Macnamara DBE (1899–1968) for her contributions to medical science and improving the lives of patients suffering from paralysis.

On Thursday 5th July, Michael Danby announced that he would not contest the seat, which he has held for twenty years, at the next election.

The first person to represent the Federal electorate of Melbourne Ports was Samuel Mauger. Of him it was said ‘scarcely a movement of any importance in Victoria to improve the average human lot and to secure a greater measure of social justice did not gain in coherence and strength from his influence’. (source: Australian Dictionary of Biography)

The following people have represented Melbourne Ports since Federation: 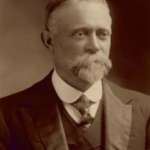 Time and Tide – The presence of J B O Hosking: A photographic exhibition