On the west side of Farrell Street is a wooden building with a sign Full Gospel Assembly, although by its neat garden and fence it is clear that it is a private house. What is its story?

In 1885 West Sandridge was well developed, the blocks of land had been subdivided for housing in Farrell, Bridge, Clark, Albert, Alfred, Evans and Ross Streets and many of the recently built houses were occupied, often by young families. It was a time when most children went to Sunday School, usually on a Sunday afternoon, even if their parents did not attend a church. Since all the churches in Port Melbourne were on the other side of the railway line, Mr James Cathie, a member of the Wesleyan Methodist Church in Graham Street, decided to open a Methodist Sunday school in his living room in Alfred Street for his own five children and their friends. Right is a photo of the opening page of the first Roll Book.

The Sunday School quickly outgrew the little living room and, at the same time, there were requests for a local church service.

A meeting was arranged on 3 March 1885 between the Reverend A R Edgar of the Wesleyan Methodist Church in Graham Street and six men who identified themselves as Farrell Street Trustees at which it was decided to purchase the block of land at 170 Farrell Street and put up a building for Church and School purposes. 1.Amazingly to a 21st century reader the same meeting set the date for the first service in the building to be on the last Sunday in April; even more amazing is the fact that that actually happened.

The small wooden church was a branch of the flourishing Wesleyan Methodist on the corner of Graham Street and Nott Street. In 1902 when various branches of Methodism in Australia combined it became simply the Farrell Street Methodist Church. Various church and Sunday School documents have survived to help to tell its story.

During the depression of the 1890s, when many residents of Port Melbourne suffered severe hardship, the church congregation organised a concert in aid of the Distressed of West Port. A highlight of the concert was “A Walk Through Jerusalem a series of 50 magnificent Pictures of Jerusalem shown by Lime-Light and explained by Mr Cathie.” 2.No doubt the same James Cathie who had founded the Sunday School. Indeed a Church Roll book shows that the family was still involved in 1931.

The Sunday School was divided into a general section and the kindergarten, the latter under the supervision of Miss Eleanor Hopkins of the Graham Street church. I have a personal interest in this part of its activity because my mother, then Ada Bellion, was in charge of the Farrell Street kindergarten from about 1918 to 1923. She spoke to me of the ‘little Farrell Street church’ and said the wives of the waterside workers preferred to come to it rather than go to Graham Street where they felt that they were looked down on by the ‘well dressed ladies’.

An item that sounds very strange to present day readers was the offer of a book prize to boys who could recite from memory the 1st Psalm and girls the last chapter of Ecclesiastics.3. I was curious to see what it was thought beneficial for these girls in 1887: the chapter is a warning to young people to remember your creator in the days of your youth before the days when the daughters of song are brought low and old age comes when one is afraid of heights … and the dust returns to the earth… Vanities of vanities, says the Teacher, all is vanity. 4. One cannot help wondering what the 12 year old girls thought of these grim words.

Details of each member of the congregation and their attendance were kept in Church Roll Books several of which survive. They show that although located on the north west side of Port Melbourne members actually came from a much wider area including Albert Park. A number of familiar family names appear including members of the Estate Agent family Sarah and Gertrude Trewavis of 120 Graham Street, Mary and Susan Monkhouse and Emily Lock who is first named as a member living at 138 Farrell Street in the Roll Book of 1936. Emily was an early member of our Society.

After World War 2, numbers attending the church increased sharply and then declined slowly.

In 1956 only nine were in regular attendance. At a Leaders’ Meeting in April 1962 they discussed whether it would be better to have a service somewhere in Garden City or Fisherman’s Bend. Finally on 2 February 1963 it was resolved that the property be sold. A scappy piece of paper (below) inserted in the last minute book gives details not recorded in the book itself including the sale price of £2,700.

Possibly the purchasers were a branch of what was then know as “The Assemblies of God” but now called The “Australian Christian Churches”. They operated it for several years, bringing people by mini-bus from neighbouring suburbs. When it was sold again the new owners converted it to a private house but have retained many of its original features. 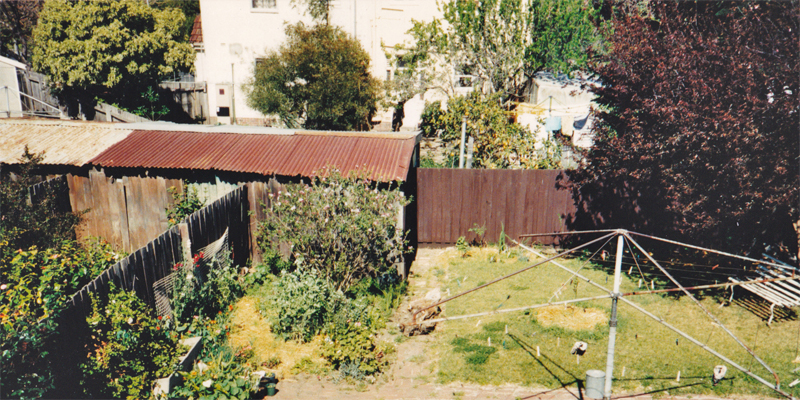