Port Talks: Ep3 – Putting a roof over your head 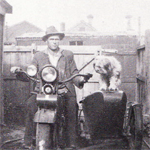 The theme is the Depression – a time of great hardship in Port.

Episode 3: Putting a roof over your head

Tom Hills ran away from his Sydney home when he was thirteen. He was taken in by a Port Melbourne family. During the 1920s he pulled the ferry across the river at the swinging basin where the Webb Bridge in Docklands is now.

Unemployed during the Depression, he became president of the local Unemployed Workers’ Organisation, led sustenance workers in many struggles for survival and dignity at Fishermans Bend, and resisted many evictions.

He became Vice President of the Waterside Worker’s Federation (Melbourne) and later was president of Melbourne’s Retired Waterside Workers until his death. Always an active militant, he stood for many years as a Communist candidate for Port Melbourne Council.

How did Tom and others in Port resist evictions?

Port Talks was written and produced by May Jasper with sound engineering by Andrew Callaghan.

The project has been supported by the City of Port Phillip through the Cultural Development Fund.

Tom Hills is pictured with his dog Wops, about 1932. Tom, and his wife Dot, were later evicted from this house in Albert Street, Port Melbourne, for non-payment of rent.