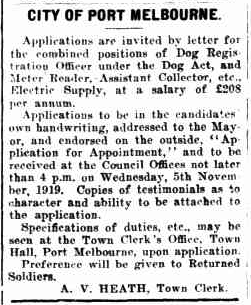 In late 1919, J Gilbert Adair applied to Port Melbourne Council for the combined position of Dog Registration Officer, Meter Reader and Assistant Collector for Electric Supply. Over 100 applications were received*.

Prior to the war he had worked for the Department of Lands & Surveys in Perth, WA for 10 years but had returned to Melbourne because of the climate. Currently he was working for the Land Tax Branch in the Federal Tax Department.

At the time of his application he was married and living at 33 Swallow Street.