Next of Kin:
Frances Ainsworth (mother)
Amana
via Northampton, WA

Parents: William and Mrs Francis AINSWORTH, brother Herbert James AINSWORTH killed in action, 29 July 1916. Born South Melbourne, 208 Graham Street, raised Western Australia. Enlisted Western Australia and appears to have been defaulted to South Melbourne by AWM staff when no response was given to the question as to place of association on the circular. Herbert was born in Port Melbourne, but listed under a Western Australia district on the circular. AWM Roll of Honour suggests he was also known as Elias Edwin William AINSWORTH, a Death Notice from his mother in the Port Melbourne Standard has him as Elias Megerney AINSWORTH “loved grandson of the late Mrs SHORT, South Melbourne. Originally posted as Missing, declared killed in action at that date by a Court of Inquiry, April, 1916)

We get a glimpse into the Ainsworth family through this letter from Jack and Herbert’s father William published in the Standard newspaper on 29 April 1916. 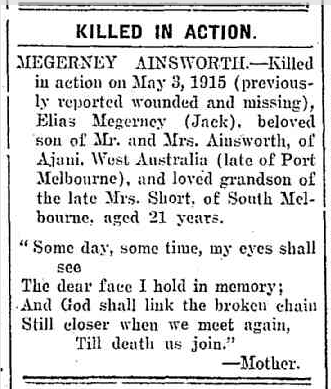