Sister: Miss Wilhelmena Arthur (parents deceased), born South Melbourne. Enlisted as a 24-year-old rubber worker with his sister at 153 Stokes Street, later Mrs W. McBRIDE, 46 Brooke Street, Albert Park. He was posted as Missing, on 1 January, 1917, change to Missing and Dead or Captured around a week later, finally as killed in action as at the original date in January of the following year.

L Arthur was listed on the Swimming Club Roll of Honour, 25 November 1916. 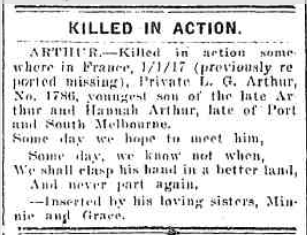