Father: Oscar Franz BERGSTROM, born Port Melbourne, educated Graham Street SS, 65 Albert Street. He enlisted as a 23-year-old clerk with family in Coburg, circular returned from there and nominated that as the principal place of association. Died of wounds at the 12th General Hospital after earlier suffering a severe gunshot wound to the knee. Brothers 68536, Herbert Harold and 75, Oscar Gilbert BERGSTROM enlisted from the Coburg address, 5978, Albert Victor, married, from West Melbourne taken Prisoner Of War – all three were born in Port Melbourne and were listed as ex-pupils of the Nott Street school. The second son, Charley’s Attestation notes his father born in Sweden and resident in Australia for 40 years, mother born locally. 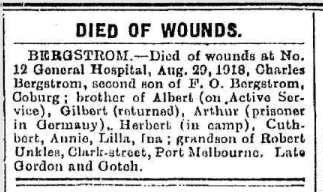