Parents: Edwin and Jane BLONDETT, born Port Melbourne, educated Nott Street SS. He enlisted as a 26-year-old tramways gripman with his father at 61 Dow Street (woodyard), eldest son. Circular returned by father from East Brunswick. Twice hospitalised with frost bite and then wounds prior to his death. He was the only one of the family name to enlist and the Port Melbourne Standard suggested that special mention of Blondett’s sacrifice was to be made at a Memorial Service planned for the Graham Street Methodist Church on 17 March, 1918. 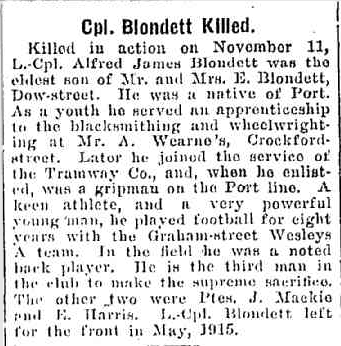