The following comment by Brian Membrey has alerted us to Charles Burrows who served in the British Army during WWI.

Leslie Thomas SPAIN was a brother-in-law of Charles BURROWS, 33034, Bombardier, D Battery 123rd Brigade Royal Field Artillery, British Army who died of wounds in France, 5 June, 1917 and who is included on the AWM Commemorative Roll of Australians killed while serving with Allied forces. Elizabeth Frances SPAIN (born Port Melbourne) married Burrows in 1913, one child Charles John (“little Jackie” below born Port Melbourne, 1914. Little is known of Charles Burrows – he may have been a British Reservist, a group who originally enlisted in the British Army for a 12-year period, but who were released back to civilian life ahead of time on the condition that they return to their units should England find itself in a case of serious conflict. About 200 of these men entered Victorian Barracks on 6 August, 1914, some eight or nine days before general recruiting commence and sailed with the “First Fleet”: on 10 October to re-join their British regiments.

Charles’ great niece, Kate Loe, has provided the following photograph of his grave at Henin in France plus a certificate in his memory. 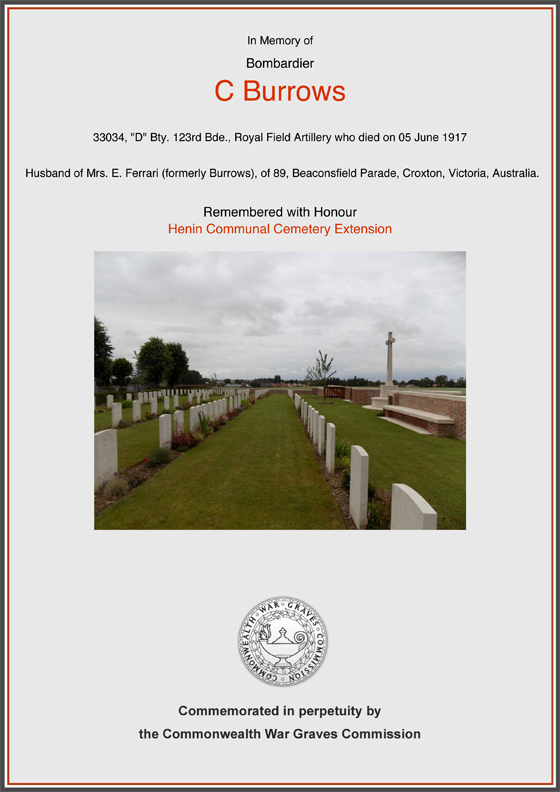