Played football in the VFL for Geelong, cousin of St Kilda VFL footballer Claude Terrel Crowl who was killed in action 25 April 1915.

JOSEPH TERRELL CROWL: First Geelong Officer to be Killed in Action at the Dardanelles 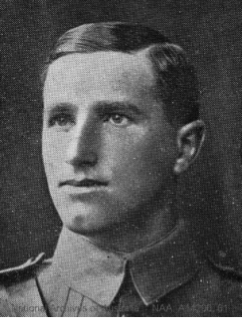 Joseph was educated locally at Flinders School and when the family was posted away from Geelong, young Crowl stayed, finding work in the stock division of Armstrong, Howe and Co., which eventually was taken over by Dalgety and Co.
An outstanding athlete, Crowl showed talent in several sports, including football, swimming and sailing. He played football while at Flinders School, then with Chilwell before joining Geelong Football Club in 1906 and playing four games that season against Collingwood, Essendon (twice) and South Melbourne.

Playing mainly in the back pocket or ruck, he was not a regular in the Geelong line-up and drifted away from league football to concentrate on his business career. He was promoted to stock agent and then went on to become an auctioneer manager. His cousin Claude Crowl had followed a similar career path, played for local VFL clubs, and also becoming a stock agent. Joseph Crowl was described as a gregarious character who made friends easily.

When war was declared Crowl, who had been a Lieutenant in the Australian Light Horse Militia (29th Squadron), volunteered. He had been eager to serve, but there were health issues relating to complications from an operation. After review, however, he was appointed adjutant at the Broadmeadows training camp in the 8th Light Horse Regiment.

Crowl sailed to Egypt on the HMAT A16 Star of Victoria on 25 February 1915 and took part in the famous landing at Gallipoli on April 25, 1915. Just two months later, on June 27, he was killed when a six-inch Turkish shell exploded near him at Walker’s Ridge.

The city of Geelong went into mourning at the news of Captain Crowl’s death and the News of the Week reported in its 5th August edition:

The first Geelong officer to be killed in action at the Dardanelles is Captain J T Crowl, news of whose death reached his father, manager of the National Bank at Port Melbourne on July 28″. Captain Crowl was a member of the Geelong Auctioneers’ Association, and the offices were closed for an hour on Friday as a tribute to his memory.

Captain Joseph Terrell Crowl (killed) was well and widely known throughout Victoria. As a stock salesman and manager of the stock department of the Geelong branch of Dalgety and Company he was brought into close touch with the pastoral and agricultural interests of the Western District. Among the stock raisers and producers, he was held in warm esteem…
When news of his death reached Geelong flags were lowered half-mast throughout the city and the offices of the stock and station agencies were closed for an hour as a mark of respect.

When a staff officer was asked to comment on Crowl regarding “particulars required for the Roll of Honour”, he wrote: “Captain Crowl was a perfect soldier, a splendid officer. He died as he would have wished, doing his duty.”

The family death notice under the heading “KILLED IN ACTION” appeared in the Argus on July 31, 1915.