Wife: Mrs Millicent Alice HAIR, born Port Melbourne. He enlisted from 134 Buckhurst Street, South Melbourne as a 37 year-old labourer (Dunlop Rubber Company), wife as next of kin. No known grave, eyewitness reports suggest he and three others entered a tunnel under heavy shell fire with the intention of blowing it up, but only one of the four re-emerged after the tunnel collapsed. Noted as enlisting December, 1915, previously rejected. 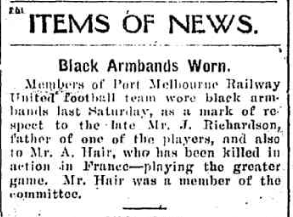 The End of the War – Hostilities Cease