Parents: Edward and Mrs Elizabeth LUND, born Port Melbourne, educated Nott Street SS. He enlisted as a 20-year-old labourer with his father as next of kin at 47 Albert Street, Port Melbourne, the circular returned by his mother from same address. Brothers, 3182, Henry Byron (Harry) LUND enlisted from 16 Ward Street, South Melbourne with his mother in Albert Street as next of kin; 1698, Edward Axel LUND with his father in Albert Street. Edward’s Attestation shows enquiries revealed was born in Norway and naturalised. Horace was noted as paying the supreme sacrifice at the unveiling of a third panel of the Honour Board at the Graham Street Methodist Church, Standard, 23 March, 1918. 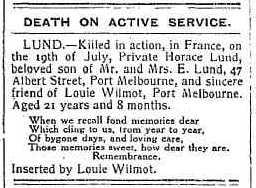