Parents: James and Mary PINKERTON; husband of Lilian Agnes PINKERTON, brother 825, William PINKERTON (South Melbourne Roll) killed in action 25 April, 1915. Born Brisbane, educated SS, Brisbane?, family later at 197 Richardson Street, Albert Park. He enlisted shown as a 30-year-old caretaker with his wife shown as c/o Port Melbourne Cricket Club. He was noted in the Record as being the curator at the Port Melbourne Cricket Ground after previously working at South Melbourne. No circular returned, additions to the Attestation later place his wife at 285 Esplanade East, but further suggest she was deceased by 1923 when medals were distributed. 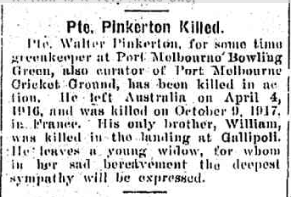