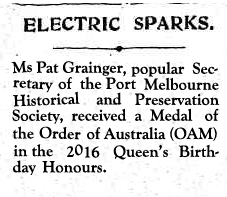 We are delighted to inform Members that Ms Patricia Grainger has received a Medal of the Order of Australia (OAM) in the 2016 Queen’s Birthday Honours for service to history preservation.

Pat was a founding member of our Society in 1993; held the role of Treasurer for five years and has been the Secretary since 1998. Pat is no ordinary Secretary. Her reach and influence is felt across every aspect of the Society. Her drive and commitment has been instrumental in building a volunteer Society that would make some professional organisations look amateurish. The quality of the Society’s collection, publications, events and exhibitions is of the highest order. Pat’s commitment is phenomenal and is instrumental in the Society’s success and longevity.

Prior to the Society being formed, Pat was involved in many local campaigns including the “Save our Railway line” and “Vintage Port – Worth Preserving” campaigns.

Pat is fastidious. She draws upon a very distinguished career as a graphic designer – having built one of Australia’s most sought after graphic design studios with her then husband. Those design skills have been shared with the Society and the professionalism of everything that goes out under the Society’s name and banner is something of which to be proud. This has been recognised by the number of awards the Society has received over the years.

Pat is an amazing woman who loves Port Melbourne, its people and its history. We are so lucky to have her – she is a gem. The then Port Melbourne City Council also thought so and made Pat the last recipient of its Citizen of the Year Award.

I am sure that everyone connected with the Society will join me in congratulating Pat on this award.