On this warm Anzac morning, the crowd swelled and swelled, almost filling the Beach St roadway between Bay and Nott Street.

A bearded Perce White attended the Anzac Service to acknowledge and thank all those who had supported the commemoration over many years.

Perce White took on the role of MC of the service when the RSL handed in its commission and former RAAF officer Bert Stutchbury was no longer able to continue.

Perce formally handed the baton to Dale Allchin who will be the MC from now on.

Guest speaker Major Andrew Leong enlisted as a reservist in 1988. He had recently returned from Afghanistan where he had been engaged in training role. He paid tribute to the Afghan soldiers alongside whom he served. They were the courageous ones, he said. He reminded us that Afghanistan has been at war for over 40 years. In that country, there is no guarantee that when you set out in the morning you will return safely at night.

Forty one Australians have been killed in action and 261 wounded in Afghanistan. 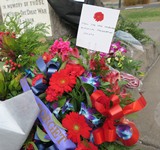 Johnny May and his grandson laid the wreath on behalf of the Society.

The notes of the Last Post were steady. After the minute’s silence and the Ode, the students of Port Melbourne Primary sang vigorously.

There was goodwill as well as solemnity in this gathering that flushes an ever increasing number of Port Melbourne people from their homes on the morning of the 25th April each year.