Bernard Charles Allwell, 33 and Richard Ernest Allwell, 20 of 417 Bay Street enlisted together on 13 July 1915 and sailed as part of the 23rd Infantry Battalion, 4th Reinforcements onboard the HMAT Hororata on 27 September 1915 from Melbourne and returned to Australia on 10 December 1918.

Their brother, Frederick Adolphus Allwell, 25 enlisted on 12 October 1915 but was subsequently posted as a deserter. 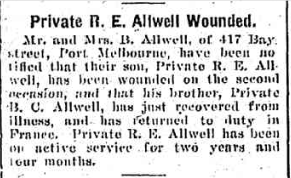