Pte J McKissock wrote to the Editor of the Standard from France on 9 April 1917 saying that the newspaper was enjoyed by all the Port Melbourne boys at the front.  He enclosed the issue of 6 January 1917 signed by the soldiers from Port who had read it.  T Lovell was one of those men. 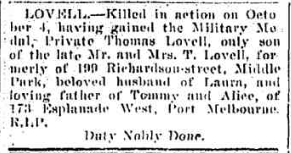