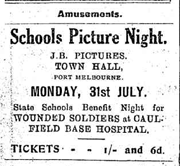 On the evening of Monday 31 July 1916 a State Schools Benefit Night was held at Port Melbourne Town Hall to raise funds for providing comforts for the wounded soldiers at the Caulfield Base Hospital.

Tickets were sold through both the Nott Street and Graham Street State Schools and. according to the Standard newspaper, the hall was provided on very generous terms by the management of JB Pictures.

PMHPS has a ticket for the Benefit as part of its collection.  It was among the papers found in the recess of the Nott Street School “Old Boys” Memorial.  Those papers were used to record “old boys” from the school who had enlisted for the First World War and should be included in the school’s Roll of Honour.

The name recorded on the reverse of the Benefit ticket is Gunner Albert George Smith who was born on 13 June 1893 and served on the cruiser “Psycho”.