A short article and a notice in the Standard newspaper on 20 July 1918 alerting readers to the latest efforts, a picture show, by Nott Street School to raise money in aid of the patriotic funds.  The article notes the school had already raised over £300. 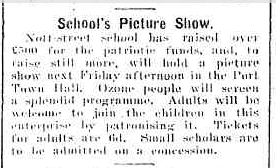 The picture show was held on Friday afternoon, 26 July at Port Melbourne Town Hall commencing at 2.15pm.  The films would be shown by Returned Soldiers from Ozone Pictures who also presented programs at the Town Hall on Monday and Tuesday evenings.

PMHPS has a ticket for the show as part of its collection.  It was among the papers found in the recess of the Nott Street School “Old Boys” Memorial.  Those papers were used to record “old boys” from the school who had enlisted for the First World War and should be included in the school’s Roll of Honour.

The name recorded on the reverse of the Show ticket is Llewellyn Jones, Service Number 3416.  The card also stats he became a government scholar at the Common High School although it was probably known as the Melbourne Continuation School at that time.