Margaret Bride writes of the stories locked up in this handsome clock on the wall of her dining room.

I inherited this clock from my mother. It hangs on the wall of our dining room and is constantly referred to when we want to time ourselves. It is a source of pleasure to all our family but it is also a reminder of some of the sorrows and joys of our Australian heritage. 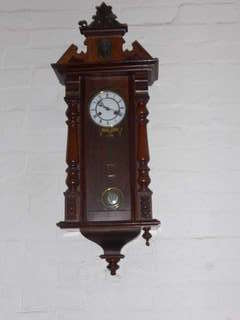 I have learned from a clockmaker that it was probably made in Germany sometime about 1825-1830. It was brought to Australia in the 1880s by ‘Father’ Falkenreich who had been an early member of the German socialist movement in Schleswig-Holstein and strongly opposed to the militarist government of Bismarck. He had migrated to Australia in order to be free of this. During his years in Port Melbourne he assisted a number of his compatriots to do likewise, often illegally as far as the Victorian or Australian governments were concerned.

The Falkenreich family, Ma, Pa and their daughter Bertha, were neighbours to my grandparents Albert and Lettie Bellion and part of a small circle of close friends living in or near the Graham Street shops, later demolished for the construction of the Graham Street overpass. Pa ran cows on Fisherman’s Bend and ma sold the milk from their house. Bertha was a piano teacher and taught my mother. My grandfather ran a grocery business supplying ships, particularly those of one of the German shipping companies.

The commencement of World War 1 changed the lives of all of them. My grandfather’s business collapsed and anti-German hysteria gripped many people in Port Melbourne. Pa Falkenreich was interned as an enemy alien and his dairy business was lost. Ma was grief stricken and without income; Bertha’s pupils deserted her and she began to drink to deaden her pain. After about a year in the internment camp Pa died of pneumonia. In the 1919 influenza epidemic Bertha also died.

I think this must have been when their house was sold and my grandmother, Letty Bellion, brought Ma into her home for refuge. Ma did not have many possessions but she did bring this clock with her.

The clock stayed in my Mother’s family and moved around country Victoria with them. It now hangs in our dining room, so it is back in Port Melbourne again quite close to where Pa Falkenreich once had his dairy.