As we have seen from previous articles about the history of Port Melbourne the many wooden cottages and their closeness to each other made them susceptible to fire spreading from one building to those adjoining it, should a fire break out in one. The lack of a reliable high-pressure water supply and the relative crudeness of firefighting equipment, not to mention the lack of a well organised and a centrally coordinated fire service made the potential for considerable loss quite high in nineteenth century Melbourne. Just such an event happened in 1867 in Rouse Street.

On 5 March 1867, a fire broke out in a four-roomed wooden house in Rouse Street owned by John Regan, a boat-builder, which was just one building away from the Auld Reekie Hotel. Unfortunately, the fire coincided with maintenance being carried out on the water main from Yan Yean and there was no water available from the main to fight the fire. However, there was no shortage of firefighters as brigades from Melbourne, Sandridge and Emerald Hill attended the blaze. In addition, members of both the land and water police were present along with sailors from HMS Challenger and, as would be expected, many members of the public. The fire resulted in both John Regan’s house and Henry Pywell’s greengrocer’s shop being destroyed and the wall of the Auld Reekie Hotel being damaged as well as James Locke’s house which was alongside John Regan’s house in Rouse Street.[1]

The Auld Reekie Hotel was owned by John Turnbull a prominent member of the Sandridge community, he was a councillor for fifteen years, Mayor from 1877-78, supporter of the first library in Sandridge and a property owner. Like many other members of the local community John came from a humble background, he was the son of a Scottish farmer and had chosen the career of baker before coming to Victoria with his family in 1854.[2] His business ability was demonstrated before he left Scotland however because at the time of the 1851 census in Edinburgh John, aged thirty, was described as a master baker employing twelve men.[3] When the family departed Liverpool on 6 November 1853 on the Boomerang the family numbered six members: John, his wife Margaret, Isabella aged 9, Phipps aged 6, Mary aged 5 and John aged 2. Unfortunately, baby John died during the voyage on 11 December 1853 and was buried at sea. John had married Margaret Keith on 12 February 1847 in St Cuthbert’s, Edinburgh after banns were read three times as proclaimed by the church.[4] At the time, John and Margaret were both living at 5 William Street, Edinburgh with their daughter Isabella who had been born in 1843/4.

Their first colonial born child was James Keith Turnbull who was born in Sandridge in 1856. Another boy named William arrived in 1858 then another in 1861 who was named George Wilson Thomas Turnbull, but who died in 1862 aged 18 months. Their last son was born in 1864 and was named David Walter Turnbull.

After arriving in Sandridge John began a bakery and confectionary shop in rented premises in Bay Street. By 1859 however he had moved to his own premises on the corner of Rouse and Nott Streets where he was listed as being a ‘grocer’ in the Sands and Kenny Directory, although he was still working as a baker as detailed in later editions of the directory.

John and Margaret’s daughter Isabella married John Wilson in 1860 when she was 16. Tragically, Margaret died on 23 December 1865 when aged 39. Margaret’s funeral notice states that the funeral was to move from John and Margaret’s residence – the Auld Reekie Hotel – at the corner of Rouse and Nott Streets to the Melbourne General Cemetery on 26 December 1865. John was described as a ‘baker’ in Margaret’s death notice but was by then the owner and licensee of the Auld Reekie Hotel which had been built and shared the site with his grocery shop. The Auld Reekie was first mentioned in the November 1865 rate book with John Turnbull as publican.

John advertised in the Herald on 18 September 1867 that he was applying to the Sandridge Bench of Magistrates on 3 October 1867 to transfer his Publican’s Licence to George Vinge of Melbourne. George must have been the licensee for just a short while because his name is listed in the 1868 Sands & McDougall directory but in 1869 the licensee was William Hayes while John Turnbull was living next door with the occupation that he had brought from Scotland, that of ‘baker’. This remained the case until sometime before 1880 when the directory listed John Turnbull as a ‘General Dealer’ located on the North side of Rouse Street, between Stoke and Nott Streets. In 1880, Richard Morton was the licensee of the Auld Reekie which was at that time given an address in Nott Street, rather than Rouse Street, although it was in the same location – the North-western corner of Nott and Rouse Streets. At the time of the 1885 directory John’s general dealership premises was numbered – ‘72-74-76’ Rouse Street. By this time, the Auld Reekie had a new licensee, Mrs [Catherine] Nickless.

The move to close hotels in Port Melbourne in 1888 impacted the Auld Reekie Hotel and John Turnbull, who still owned the premises. The investigation of the hotel published in the Argus 13 June 1888 described the Auld Reekie in these terms:

Auld Reekie Hotel, Catherine Nickless licensee, John Turnbull owner, seven public rooms. This is a very old and inferior house, dilapidated, and poorly furnished. The stairs leading up to the rooms on the upper floor are constructed outside the house and are dangerous. It is 33 yards from the nearest licensed premises thereto—the Commercial Hotel.[5]

On 21 June 1888, Sir Bryan O’Loghlen appeared before the inquiry on behalf of John Turnbull arguing that the Auld Reekie should not be closed. The Chairman of the inquiry, Judge Molesworth stated that ‘there was nothing against the character of the hotel. It was an old house with a dangerous staircase’. To which Sir Bryan responded that ‘the licensee had been in the hotel for 20 years’. Judge Molesworth responded:

… this was a strong argument against the place. If the licensee had only just acquired the property, there would be an excuse for its being in the state it was, but there was no excuse for a man who had been in it for 20 years keeping it in its present condition.[6]

Apparently the Auld Reekie Hotel survived because after John Turnbull died on 13 March 1889 the hotel was offered for sale as part of John’s deceased estate. The initial advertisement appeared in the Argus on 18 May 1889 for auction on 6 June that year. The three adjoining shops owned by John were included in the sale.[7] John died intestate and a full inventory of the property he owned was made to assess his estate for probate. The February 1889 rate book shows that he owned eleven properties with buildings and a block of vacant land in Nott Street. His complete estate was valued at £3,705 and seven shillings.[8]

Catherine Nickless remained the licensee of the hotel for some time because in February 1891 she was charged in the Port Melbourne court with Sunday trading on 25 January 1891. Incidentally, Matthew McCormack of The Cricketer’s Arms was also in court on the same charges, and Sarah Roach of the Royal Mail Hotel was charged with not having the door leading to the bar closed on 1 February 1891. All the defendants pleaded guilty and were fined with costs. However, one charge of Sunday trading against Matthew McCormack was dropped.[9]

Clearly John Turnbull’s estate was not sold for it was again advertised in the Argus on 3 November 1891. The advertisement stated that an auction was to take place ‘On the Premises’ on 10 December 1891 and included the statement that the lease of the hotel was due to ‘expire in December 1892’.[10] Once again, the Auld Reekie soldiered on with the licensee George Peratinos being charged and found guilty of allowing ‘disreputable characters to remain on his licensed premises on 18th May [1895]’. George’s defence was that he ‘pleaded ignorance’.[11] Wonder who the disreputable characters were? In May 1896, the Auld Reekie was getting a spruce up as plasterers were required as day labourers. In 1897 the hotel was renamed the Washington and survived until 1915 when it was closed. The hotel was demolished in the 1990s. As a somewhat bizarre coincidence to the fire at the beginning of this article, John’s sons Phipps and James, who were both bakers, were living in Park Street, South Melbourne alongside the Munster Arms Hotel in January 1875 when a fire broke out in their premises. Both had gone to bed in the same room with lighted candles. However, James had placed his near an open window where, unfortunately, a breeze blew the curtain into the flame. In no time at all the room, which was wooden, was well alight and Phipps, who was awakened by the flames, aroused his brother and they both fled from the building. The fire quickly spread to the entire building and was so intense that it began burning the stable and other buildings in the rear of the Munster Arms.[12] The baker’s shop was destroyed, and the nearby buildings damaged. Both the Metropolitan and Emerald Hill brigades were quickly in attendance however, and with mains water available they were able to limit the extent of damage to other buildings.

[8] Image: Letters of Administration, In the Estate of John Turnbull, late of Rouse Street, Port Melbourne, In the Colony of Victoria, Furniture Dealer, Deceased Intestate. 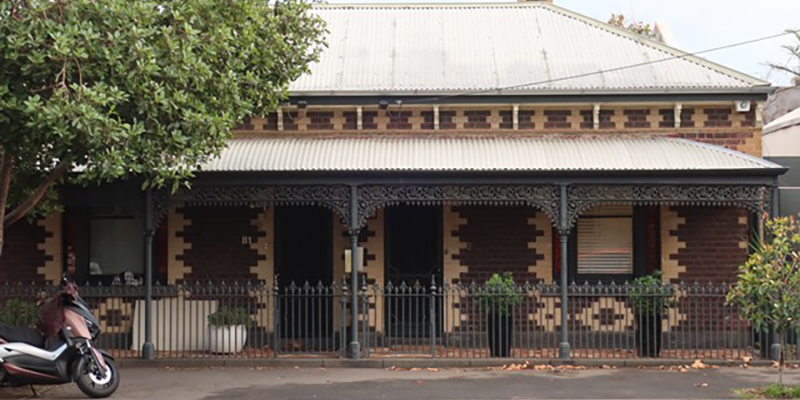 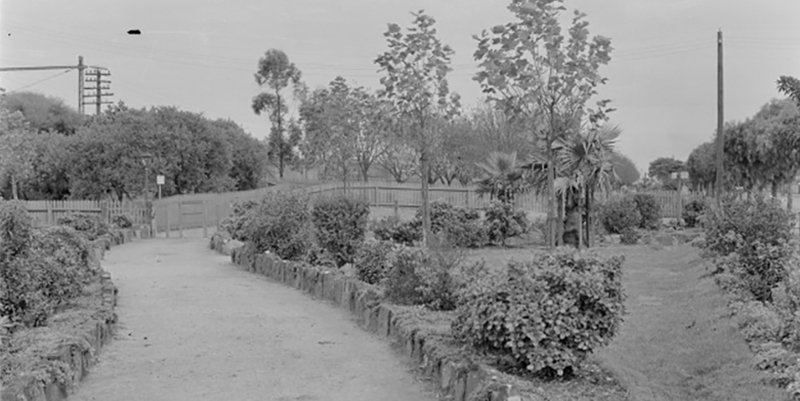 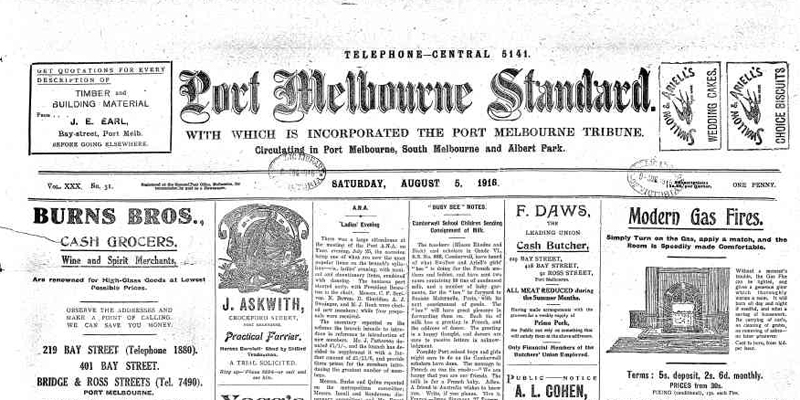