Port Melbourne’s beacons, also known as the leading lights, define the centre line of the Port Melbourne Channel. The light was visible for 14 nautical miles. Until superseded by more recent technology, the beacons guided vessels safely to the piers.

In 1923 once the new Railway Pier, later Princes Pier, was fully operational, the Melbourne Harbor Trust wrote to the Department of Lands asking for permission to acquire a site for the rear beacon and for “arrangements be made for the land in front of same being kept free of buildings so that the visibility of the beacon is permanently assured”.

There are no rocky shores, no perilous coast, on sheltered Hobsons Bay and yet these lighthouses were built to a Trinity House lighthouse design. Information about that design decision has yet to be found. The beacons were constructed in 1924.

According to Lighthouses Australia, the Rear Light’s “main light is red, occulting every six seconds, and three metres below it is a 24 hour a day directional light, with green, white and red sectors, each showing over only a fraction of a degree, to mark the precise centre of the channel, in a particularly narrow arc of 1.5 degrees”. Although no longer strictly required for navigation, the on shore beacon still flashes.

Off shore and on shore. This is the terminology used by former PMHPS member Glen Stuart whose advice was taken on all matters shipping and maritime. Glen worked for 29 years at the Commonwealth Government Marine Engine Works. Even this bulky structure was sited in such a way that it avoided intrusion into the sight lines of the beacons that were then so essential for navigation.

The photograph below shows the beacon in relation to the Commonwealth Government Engine Works, the Mission to Seamen and the western pillar of Centenary Bridge, as well as the timber footbridge that then connected the beacon to the shore – a popular place for young people to swim and fish.

The beacons, while modest icons, have always been a well loved features of Port.

In the late 1980s when planning began in earnest for the redevelopment of the area between Port Melbourne’s piers, there was strenuous community campaigning to preserve elements of Port Melbourne’s heritage.

Swallow Street resident and La Trobe librarian at the State Library of Victoria, Dianne Reilly Drury, prepared a submission in support of heritage listing for the beacons to the Historic Buildings Council.

On 23 March 1995, the Leading Lights were added to the Victorian Heritage Register confirming their importance to the history of the state as well as to Port Melbourne. Their unique form and placement added weight to their significance.

That unencumbered vista made its way into design guidelines for planning Mirvac’s Beacon Cove estate. The axis of the onshore and offshore lighthouses became a key element of the site layout and street pattern.

Then Manager of Urban Design and Architecture at the City of Port Phillip, Jim Holdsworth, who was also a keen yachtsman, suggested to Mirvac’s architect that the third tower, then in design development – on the opposite side of the channel axis – should have the same partially-stepped profile as the second building, but in reverse. The suggestion was taken up. Now the mirrored silhouette of those two buildings serves as a somewhat large scale pair of ‘gate posts’ framing the navigation axis that is the marked and dredged shipping channel into Melbourne from the Fawkner Beacon, some ten kilometres down the Bay and visible from that distance1.

The guidelines have since been further reinforced by being included in the Neighbourhood Character Overlay for Beacon Cove which requires that ‘residential buildings should maintain the front setbacks that are the prevailing pattern of development in Beacon Vista’. This has taken what was once a functional requirement for navigation into the open boulevard feel to Beacon Vista.

The City of Port Phillip with Mirvac commissioned the artwork by Orchard Design Studios on the foreshore on the alignment of the beacons which also references a more ancient history of navigation.

The off shore beacon is perhaps second only to Princes Pier’s forest of piles as Port’s most favoured photographic subject, an indication of the role it plays in the affections of Port Melbourne residents and visitors. The beacons’ steady presence in all weathers is a reassuring reference point in a changing world.

1Thank you to member Jim Holdsworth for his recollections, and also for his role in ensuring that the visual prominence of the Leading Lights was reinforced. 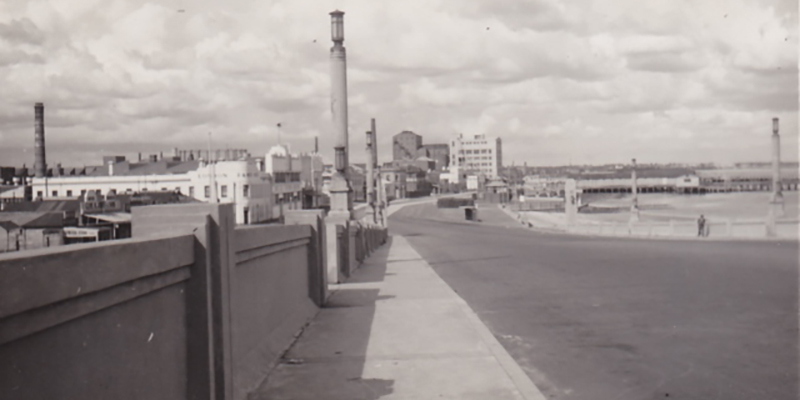