The origins of the picturesque name of this short right-of-way are not clear other than it appears to have been named at the whim of a private owner. We do know that the name first appeared in Melway Ed 14 in 1982 but prior to that the name of the street is even less clear.

Frangipani Court runs the short distance from Clark Street to Butchers Lane. At the end is a footpath that connects diagonally with Southward Avenue. John May, a former resident of Clark Street, remembers that, as a kid, the shortcut was well used to visit mates who lived on the other side. Speaking at a panel discussion at the PMHPS meeting in February 2010 other Clark Street residents remember fathers from the street using the shortcut every morning and evening as they walked to their jobs in Williamstown Road or further onto the Bend. John May also remembers the laneway end of the street was where the Empire Day bonfire was lit each year.

But was it a street? Clearly it is a right-of-way, albeit a very wide right-of-way, giving access to the laneway at the back of the properties on the west side of Clark Street but it doesn’t appear that prior to the modern developments of the late 20th century there were any houses facing directly onto the street.

Curiously, a street or right-of-way does not appear in the Sands and McDougall’s Directories from 1900 to 1914. Even more curiously, when the right-of-way is listed in Sands and McDougall’s from 1915 onwards it is called Smith Street. It doesn’t have its own listing, as the other streets in Port do, it is only included as a street off Clark Street. It continued to be included in the Sands & McDougall’s as Smith Street until their final edition in 1974.

It is understandable for the first few years of the century when there was very few residents in that specific area of Port Melbourne but Clark Street was well established prior to the First World War so surely the right-of-way must have existed during this time.

From the first Melway Street Directory in 1966 it is shown as an unnamed street until, as previously mentioned, it becomes Frangipani Court in 1982. It isn’t included at all in Robinson’s Street Directory of Melbourne and Suburbs, Ed 3, c. 1950s. There was already a Smith Street in Port Melbourne on the other side of Williamstown Road, dating from the 1890s, so it is unlikely that this street off Clark Street would also have been formally named Smith. To reinforce this, a City of Port Melbourne map from 1963 does not assign a name to the street.

While Frangipani Court gets a mention during the Clark Street panel discussion from 2010, there is no mention of Smith Street. It is only referred to as the right-of-way. The mystery deepens.

Lil Goss at that Clark Street panel discussion in February, 2010, told the story that scenes for an episode of Matlock Police were filmed at the store in the 1970s. As Lil tells it, many locals were gathered on her verandah watching the filming taking place and exchanging quips with the show’s star, Michael Pate. Meanwhile the kids were on their bikes causing havoc. They’d ring their bells during takes forcing the director to yell ‘cut’. Not on purpose, surely!

It is, however, the house that once stood at 153 Clark Street that points to why Sands and McDougall would have identified the right-of-way as Smith St. The first time 153 appears in the directory, In 1902, the occupant is listed as Harvey Smith.

Harvey Smith was born in Malvern in 1864 and married Annie Jeffrey Wilson in 1884. Annie was born in Sandridge in 1866. She died at Dr Sterling’s Private Hospital on 3 August 1905 after a short illness. Her funeral was well attended and she was buried at Boroondara Cemetery. Her obituary in The Standard on 12 August 1905 says her parents, Mr & Mrs John Wilson, were very old residents of Port Melbourne and her two sisters, Mrs W McPherson of Raglan Street and Mrs Dean of Kensington, are also well known in Port. It goes on to say she was one of the auditors of the Duchess of York Lodge, U A O D.

Harvey remarried in 1907 to Margaret Liddell and continued to live at 153 Clark Street. Smith Street first appears in the 1915 edition of the Sands and McDougall Directory. Harvey Smith is listed at 153 until 1938 having died at the Freemasons’ Hospital on 7 June 1938 aged 74. The Record, 11 June 1938, described him as a ‘very old and highly respected resident of Port Melbourne and was quietly interested in local activities‘. He had worked for the railways and ‘for some years was engaged at the parcel office at the Flinders Street station where he won a reputation for courtesy and efficiency in his relations with the public‘. He was survived by his widow, Margaret, two sons, Harvey and Allen, and a daughter, Mrs J Ross. He was also buried at Boroondara Cemetery.

Margaret lived at 153 after Harvey’s passing until 1951 when Ormond H Stevens moved into the house. He stayed until 1958 when Mrs D T Jenkins is listed as the occupant and she stayed through to at least the mid-1970s.

In conclusion, it seems that what is now known as Frangipani Court was informally known as Smith Street, at least to the compilers of the Sands and McDougall Directories, due to the Smith family living at 153 Clark Street from 1902 to 1951. Sands and McDougall’s continued to refer to it as Smith Street into the 1970s even though it appears to have fallen out of common usage many decades before that.

Conversation with John May, July 2022 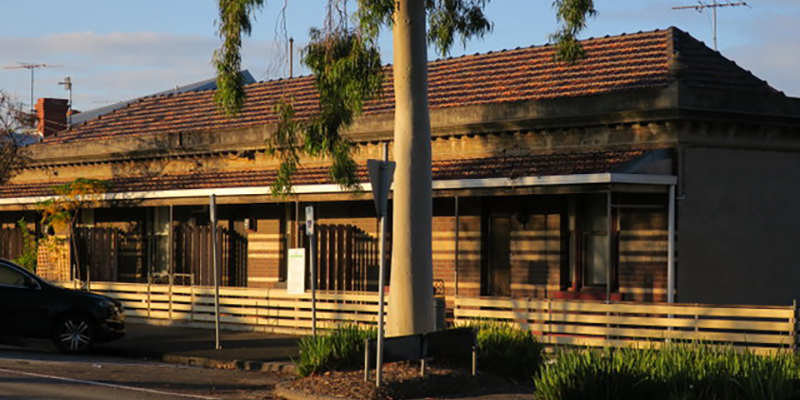 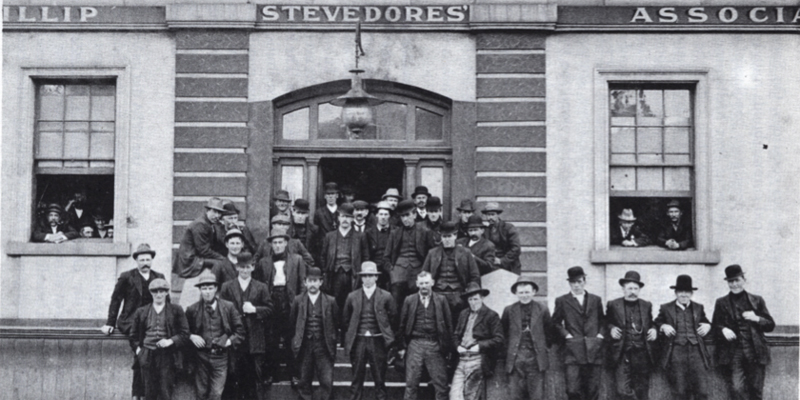