The 1853 sketch of Sandridge beach gives some idea of the swampy nature of the area between Bay Street and the mouth of the river. 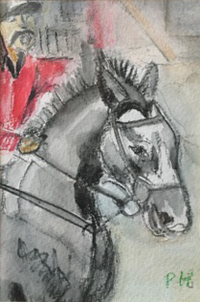 The decade began with the long awaited separation of Victoria from New South Wales. That event was announced by Wilbraham Liardet who, dressed in his huntsman’s red coat and blowing on his trumpet, rode from the Hobson’s Bay to Melbourne with the letters telling the news. As he rode he shouted Hooray! We’ve got separation at last.

There is no question that the revelation that there was gold in Victoria was the transforming event of the decade for Sandridge, as indeed it was for the whole of Victoria.

When the discovery was announced in mid-1851 many workmen downed tools and set off for the diggings. The crews of ships moored in the bay deserted and from the Sandridge beach the empty ships could be seen riding at anchor, even some of the ships masters deserted. The township of Sandridge was eerily quiet.

By mid 1852 it was a different story. Once the news reached overseas men crowded onto ships to try their fortunes. Business of all sorts thrived: the boatmen ferried passengers ashore; chandlers sold buckets, shovels and picks; grocers sold all the food supplies for the diggers journey inland and householders rushed to offer temporary accommodation for the new arrivals while they equipped themselves to dig for their fortune.

On September 12th 1854 the Hobson’s Bay Railway Company opened the first railway in Australia, taking cargo and passengers from the town of Melbourne to Sandridge. This was an occasion for great celebration and its route defined the shape of Sandridge from then on. The railway company was granted a large area of land to build its workshops and these became a significant source of employment for local men. The company planned to build a new pier at the rail terminus but this proved a difficult engineering task finally, solved by sinking old ship hulks to support the piles. The two piers, Railway and Town Piers became focal points for the building of warehouses.

It was an opportunity for local manufacturers to expand their business and for new ones to open up. One of the most famous was Swallow and Ariell that opened in 1854 at the terminus of the railway.

The following account of a fire in Sandridge in 1855 gives an excellent insight into the extent to which the town had developed in the four years since the discovery of gold.

On a very hot, windy night January 23rd 1855 a fire began in the warehouse of Gameson and Nankerville in Bay Street, burning fiercely destroying sixty to seventy houses and doing damage to the value of £100,000.  The account of the fire in the Argus newspaper reported that also burned were Mr Crawley’s saw-mill, a coffee works, a quantity of stacked timber, Chamber’s fruit-shop, Litchfield’s Prince of Wales Hotel, Cruikshank and Meston’s hosiery store, the premises of Mr Palmer, builder and timber merchant and a quantity of she-oak belonging to Mr Morley. The whole eastern end of Sandridge was destroyed.

Housing continued to be expanded but only a few of those built before 1860 still stand today. Of those the most substantial is Peckham Terrace completed in 1859 on the west side of Bay Street just north of Bridge Street.