Only a fragment of the presence of the massive engineering firm of Malcolm Moore Pty Ltd survives in Bertie St, Port Melbourne.

Malcolm Moore set up his firm’s manufacturing centre in Williamstown Road, Port Melbourne in 1927. Branches were later opened in every State capital and several provincial centres.

The firm specialised in the design and manufacture of mechanical-handling and construction equipment.

Malcolm Moore advertised regularly in the Port of Melbourne Quarterly, published by the Melbourne Harbor Trust Commissioners from 1948. The full page advertisements give a sense of the scale and scope of the manufacturing operations at Williamstown Road. 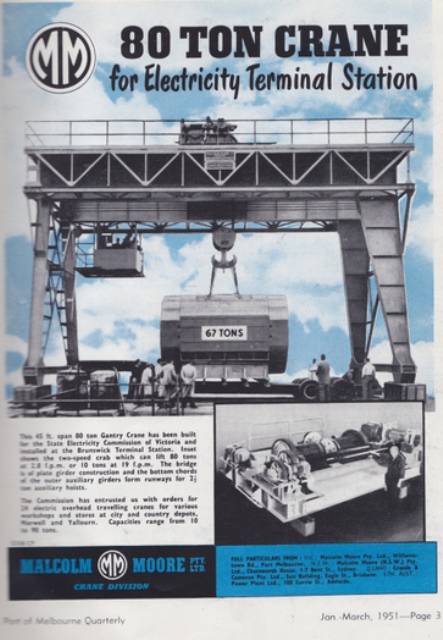 Equipment manufactured by Malcolm Moore can be found in far flung parts of Victoria and the rest of Australia. Closer to home, a Malcolm Moore crane awaits restoration as part of the redevelopment of No 5 North Wharf.

Moore believed in the development of institutions for vocational and management education and supported them very generously. The Malcolm Moore Industry Research Award was set up through a perpetual bequest to RMIT to support industry partnered research.

He was also instrumental in setting up the organisation which later became the Australian Institute of Management (AIM). In researching for this post, it struck me that there are interesting commonalities between the logos of Malcolm Moore and the AIM.

Malcolm Moore was also active in the Australian Inland Mission’s aerial medical service and in establishing the Royal Flying Doctor Service of Australia in 1942.

The PMHPS would be very glad to hear from former employees of Malcolm Moore who have memories of their working lives to relate, or photographs showing the presence of this impressive firm in Port Melbourne. The Society has only one photograph of  the  factory and that is of the factory being demolished in 1987.

Brushes with Fate, and with Port Melbourne – Ben Piper